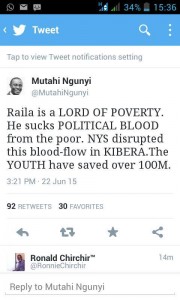 Mutahi Ngunyi, who was accused recently of taking Sh.38m from NYS so that he could help the government in spreading the good news about the 5-point NYS ambitious program, was today on fire.On his twitter account he did not respond with kind words .

It seems  the allegations touched his nerves and he’s now breathing fire,see what he wrote on his Twitter account as he accused the father of democracy:

Th political Scientist predicted well for Jubilee Government in 2013 elections.His statements made him famous until the Jubilee administration hired him for advisory services.

Mutahi and opposition leader Raila Odinga have been exchanging bitter words after it emerged that the tyranny of number man and President Uhuru Kenyatta are inseparable.

It reached a point where Mutahi openly confessed that he hates the former Kibera Member of Parliament like hell.He argued that the CORD leader is a man who cannot be trusted following his political innuendos with the previous governments;he is cunning.