Itumbi wrote in Twitter that after Raila Odinga withdrew from the presidential race, IEBC should declare Uhuru Kenyatta president elect.Kipchumba,who is a lawyer by profession told Itumbi.

The exchange between Itumbi and Murkomen left millions of Kenyans speechless. Here is the exchange. 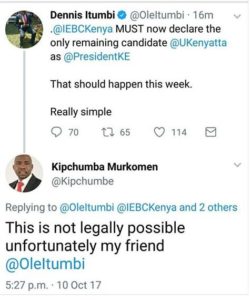