This message is shared by a concerned Kenyan who is disturbed by Magafe’s inhuman acts. According to the concerned Kenyan, Magafe has been kidnapping Kenyans and nothing much has been done so far.

Here is the message we received from the Kenyans about this inhuman guy:

Mr. Magafe, The Libyan Warlord Who Feeds On Immigrants

The name Magafe literally means the one who never misses in Somali and that is what Somalis use to describe a Libyan warlord who has made a business out of kidnapping poor immigrants heading to Europe via the Sahara desert.

He waylays for immigrants in southern Libyan and has over the years built a network of freelancers said to be mostly Tuareg militias across the Libyan Desert snatching any immigrant crossing the Libyan border. 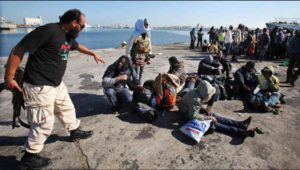 He then goes to illegally detain the immigran’ts until when they pay off a ransom to buy their freedom. Talk of slavery in the 21st century!

After he is paid a ransom, at least he is descent enough to take the immigrant’s across the desert to the coastline and hand them over to other human traffickers who charge them a certain amount of money to take them across the Mediterranean Sea to Europe via Italy.

Mr Magafe’s kidnapping business has grown so huge that it is said that he has a fleet of 4×4 vehicles, horses and even camels specifically bought to patrol the expansive Libyan Desert in search of immigrants.

He commands dozens of battle hardened-Tuareg militias who fought for the Libyan President Colonel Muammar Gaddafi and who are inhabitants of the desert themselves giving him an edge over the immigrants as his foot soldiers know every hiding place in the desert including the entire oasis where travellers rest during the hot humid day, which is the only location you can find a well or water source which in the desert means survival or death.

As a result of Mr. Magafe’s cruelty on the immigrants, it is believed hundreds if not thousands have died in Libya either in the hands of Magafe himself from torture and at times even assassinations.

If you thought that is cruel enough of Mr. Magafe wait until you hear what he does to beautiful immigrant women.
Survivors say any beautiful woman caught by Mr. Magafe naturally becomes his wife until when her family buys her off like a slave. His libido must be abnormally high since it is said that he sleeps with more than 4 or 5 women a day at times during the high season when there are many immigrants crossing the Libyan desert on their way to Europe.

His militias are said to also rape women at will or even sodomize young boys at will. The cruelty meted on the poor immigrants is simply mindboggling.
There is no picture or video available to show this man called Magafe, at least not any I know of or heard of leaving this sad story to remain a harrowing mystery.

This week one of my colleagues received a call from his brother who claims to have been kidnapped by Mr. Magafe and urging the brother to pay $3000 or else he will be killed
This bad news has understandably disturbed my friend. They have met as a family and have been forced to contribute money to send to Mr. Magafe.

I tried to speak to Mr. Magafe in vain, as he could not speak English. He could only speak his Libyan Arabic language, but from his horse voice I can imagine what kind of a face he was wearing, it must be a very angry face of a human slave trader in the 21st century.

If you have any information about Mr. Magafe, including pictures or videe please send to