The space that Simmers bar used to occupy has been converted to a parking lot for 680 hotel visitors and other Nairobians.

Today, a gate was erected at the empty space after fencing was done and a sign post next to it indicating that the space inside is for parking.At the gate,there is also a poster showing charges for parking a car in the lot; the fixed charges are Ksh 300.

Simmers Bar was demolished early this year following disagreement between the owner and the County.The county argued that the owner had not complied with its by-laws of keeping the noise low. Despite the owner rushing to court several times,the county demolished the building anyway.

Simmers bar was located opposite 680 hotel,which is owned by Deputy President William Ruto.Ruto purchased the hotel a year ago at Ksh3 billion.The hotel does not have enough parking space for visitors. 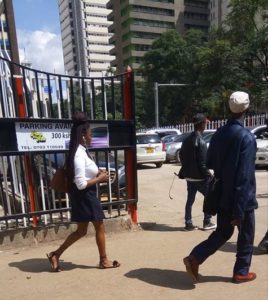