At least 40 people have been killed by Solai Dam after it burst its banks.But what’s forcing tears among Kenyans is the photo of a boy who swept by the water.

The photo shows a dead boy hanging loosely on a branch that was also swept with water as two people watch helplessly. The boy was sleeping at their home when the dam burst its banks

Here is the photo from the scene. 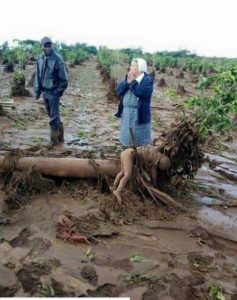