Zinedine Zidane has resigned as Real Madrid manager days after he led  the team to their third consecutive UEFA Champions League win. 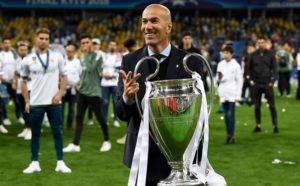 Zidane tendered his resignation a few minutes away,ending his tenure as the Manager of one of the most successful clubs in Europe.

The 45-year-old was announced Real Madrid Manager in 2016 after the dismissal of Raphael Benitez.Since then the Frenchman has won three Champions Leagues, two Fifa Club World Cups and one La Liga title

It’s not clear which team he will lead next but it’s rumoured he might succeed Jose Mourinho at Manchester United.

December 7, 2022
Today we are offering 22 sure odds of football betting tips to each of our new subscribers. The games are 100% accurate and they...

9 hidden secrets of winning Sportpesa Midweek jackpot for this week,...