The Zimbabwean man who was “raised from the dead” by South African prophet, Pastor Alph Lukau back in February is dead.

According to a local publication H-Metro, Brighton ‘Eliot’ Moyo died last week and was buried on Saturday. He left behind his wife, as they had no children.

“His stomach started swelling and didn’t stop for three days and on the third day, he died.” Said a close member of his family.

Eliot was HIV positive and he had kidney failure, as well as TB (tuberculosis). 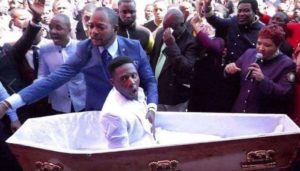