William Ruto has responded to yesterday’s incident in which Kibera youths burnt down a toilet which was built by NYS.In his reply, he refers to Raila Odinga as a Corpse which is headed to the grave.

It’s not the first time Kenyans are witnessing war of words between the two leaders as they try to out do each other politically.Above are full words from Ruto. 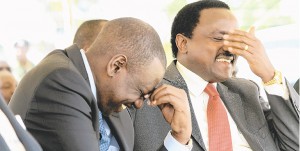