ODM nominated MP Isaac Mwaura tied the knot on Saturday in a colorful wedding witnessed by the president and ODM leader Raila Odinga.

The youthful legislature started dating Mukami in 2012 and they have been together since that time until they decided to live together until death separates them. 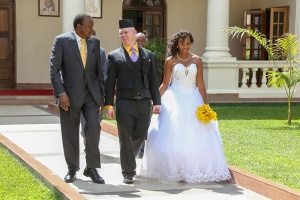 The Kenyatta University graduate is well connected politically and he doesn’t discriminate based on political affiliation.That’s the man reason both  President Uhuru Kenyatta and opposition leader Raila Odinga attended his wedding.

After the wedding,the two are set to go for a honey moon in Dubai.