A man by the name Bro Ocholla is in trouble after sending an embarrassing message on WhatsApp group which he is a member.
Apparently,the Onyango’s were celebrating their anniversary and everyone in the Embakasi Prayercell group had sent a message to congratulate them.Ochieng Ocholla woke up from nowhere and sent the following message. 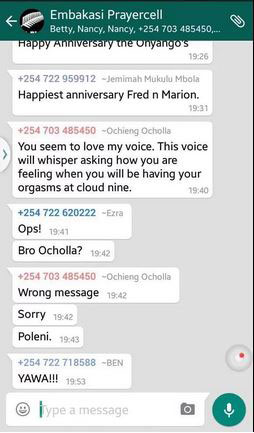 He immediately became a laughing stock, both on Social media for the manner in which he responded to reactions from the group members.His name is trending even now.

It is believed that the Luo man sent the message to the wrong group but was not clever enough to defend himself,leaving things to go out of hand.