The bridge is built from one mountain to another and it measures 3,858 feet.

Located deep in the heart of China’s Hunan Province near the city of Jishou, the suspension bridge is the largest structure on the Jishou to Chadong expressway with a deck 1,102 feet (336 mtrs) above the DeHang Canyon.

The two tunnels on either side of the Aizhai bridge allowed the engineers to use the mountain top for the location of one of the towers, reducing its height to just 165 feet (50 mtrs) – unusually short for a bridge with a span nearly as long as the Golden Gate bridge at 3,858 feet (1176 mtrs). In addition to cost savings, the stubby support also allows the bridge to blend more naturally into its surroundings. The taller bridge tower is no less unique with side span cables that soar down the backside of a mountain, making first time visitors quizzical as to what exactly lies ahead. With most of the structure hidden from view, the bridge will come as a jaw-dropping surprise whether you enter the canyon from either tunnel.

Due to a gap of approximately 328 feet (100 mtrs) between the last truss suspenders and the tops of the bridge towers, the engineers added some additional ground anchored suspenders to stabilize the two massive suspension cables and reduce any oscillations that could damage other components of the bridge. An overlook and visitors center will offer additional views of the broad valley.

The bridge was completed in October 2007 and is visited by over a million visitors monthly. 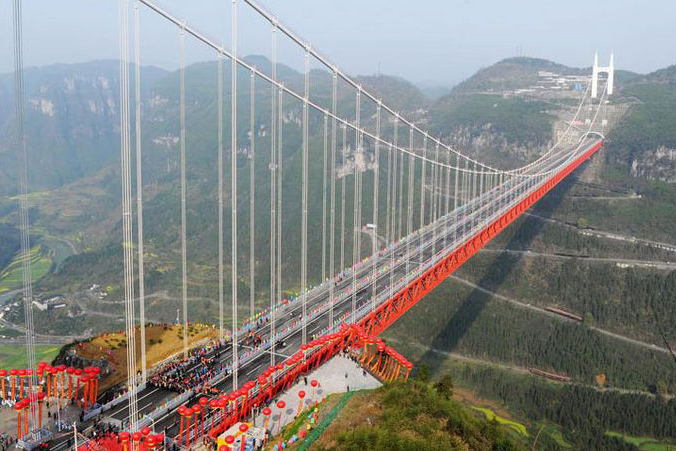