Home LATEST NEWS Woman Beaten Like Mburukenge in Konange Street After She Faked To Be...
Twitter
WhatsApp
Linkedin
Email
Telegram

A woman in Koinage Street, Nairobi escaped death by a whisker when a mob caught her red handed faking disability and extorting money.

Identified as Njoki, the woman had positioned herself just opposite Consolidated Bank. She was waiting for gullible Nairobians to give her money. Lukily, a neighbor was passing and Njoki decided to extend the extortion jar to him. The man alerted people, who came and rained on the woman until she rose and started running away. People followed her but the Njoki had athlete energy-she disappeared. 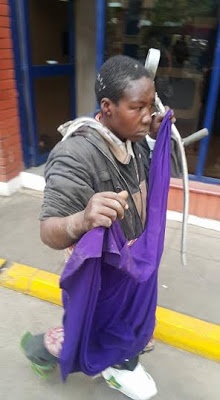