The home of George Akong’o Anyonga, who is the Chief Officer and Fund Administrator for Kisumu County  is no more after youths burnt his entire home and a brand new Range Rover Sports.

The youths descended on his compound after Mr Akong’o was accused of embezzling Ksh105m from the county coffer. They then proceeded to barricade the roads as they throw unprintable words to Mr Anyonga, whose whereabouts is not known.

Besides the loss of the cash, a vocal member of Kisumu County Assembly Paul Odhiambo Okiri was abducted Friday and his car abandoned near his home. This incident prompted the residents to teach Mr Anyonga a bitter lesson…and below are results. 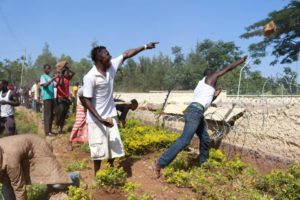