Kiambu Governor William Kabogo has acquired new armoured vehicles, which he will use to trounce Kabete MP Ferdinand Waititu.

The armoured cars were first seen in Kiambu last week when President Kenyatta toured the county. Residents lined along the road to witness the rare beasts. They posed and took pictured, shared with friends as Kabogo took the president around the county.

The governor aspirant has a total of 5 such vehicles, each costing between Ksh 10 million to Ksh25 million. He is the only governor with such high-end cars.This particular armoured car is bullet proof and can  detect even a bomb.

The governor, who is facing Waititu and Bishop Ngari,is expected to retain his seat after his rating soured .He is currently rated 46 % against Waititu’s 31 %,according to opinion poll by a local research firm. Bishop Ngari, who owns a Sh 200 million chopper, is rated third with 1 % score.Ngari is accused of defrauding investors through Gakuyo Real Estate. 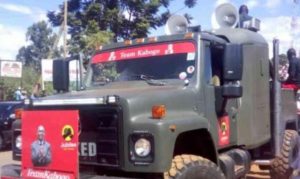 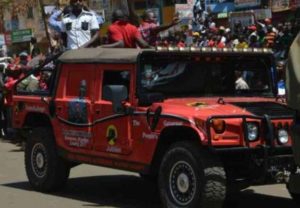 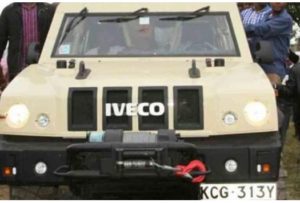