Former Prime Minister, Raila Odinga attended the late David Mwiraria’s funeral, where he had the opportunity to share a podium with sitting president, Uhuru Kenyatta.

The two leaders looked jovial, sharing jokes a minute after a minute. Crowds too watched as the two titans exchanged pleasantries.

At the end of the day, warring social media fanatics were left dejected after seeing Raila and Uhuru holding hands after the funeral.

Raila then reminded Kenyans that politics is not hatred:

“I joined the President among other leaders from across the nation to lay the late David Mwiraria to rest at his home in Meru County.

I fondly remember Mwiraria from our time serving together in the NARC days where a joint vision for a prosperous nation inspired us to rise above our differences as leaders for the sake of the nation.

I look forward to joining hands with all Kenyans in the weeks and months to come for the sake of our country under the vision of NASA”, Raila said in a Facebook post.

Mwirari succumbed to Cancer and was buried today. 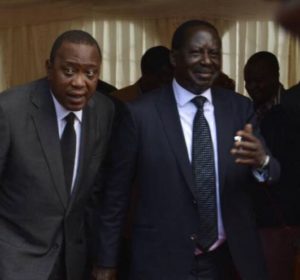