News reaching us indicate that Jubilee Secretariat head, Raphael Tuju is a frustrated man after he was forced to manipulate nomination exercise, only for him to reject.

We are informed that prior to yesterday’s nomination date, Tuju had received names of preferred Jubilee candidates in some areas. His work was to ensure those individuals won. To obey the orders, Tuju deliberately delayed the exercise to strategize on how to conduct the exercise and have the candidates declared winners after the nominations. But things started falling apart when voters became impatient and demanded that they be addressed.

By 9 am, the exercise had not started. It emerged that the Jubilee Party had printed exact number of ballot papers but some of the politicians in Jubilee sneaked with unmarked ballot papers to be used for preferred candidates-that’s why ballot papers were not enough.

Tension grew and violence erupted in some parts of the Jubilee strongholds.Tuju was called by the president to address Jubilee members. During the address, he declared that the areas where competition was stiff to stop the exercise until further notice. In Kiambu, Nandi, Kirinyaga, Uasin Gishu, Nairobi and Bomet were hot spots, counties where a certain candidate had to win, by all means.

After 2 hours and when the Jubilee principals sensed their dreams were not forthcoming, they ordered Tuju to call off the exercise and also not to address the media.

The exercise will be conducted two days to the IEBC deadline so that those who have no party by then will be locked out of contesting for respective seats. 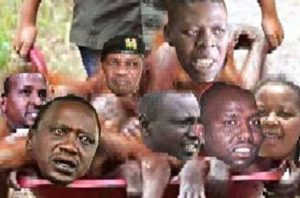 October 31, 2020
Sportpesa Kenya is finally back, we are excited for that. From today henceforth we will be sending betting...

October 30, 2020
As you prepare to bet for Betika jackpot, you should also register for Mozzart jackpot and start betting...

October 25, 2020
When you analyze football matches on your own,it’s always hard to win because there is that one game...

October 26, 2020
There is someone who placed a bet for Celtic, Juventus, Arsenal and Everton---he didn’t sleep. Those were high...