Home ENTERTAINMENT I Will Show You My “Madiaba”Until You Vote For Me: Nairobi Women...
Twitter
WhatsApp
Linkedin
Email
Telegram

Karen Nyamu, Nairobi Women Representative aspirant, has released a video showing her vigorously shaking her behind in Kitchen.

The video, which was released for men, shows her shaking the “madiaba”to extremes, to attract the attention of Nairobi male voters. The one-minute video has gone viral and has been saved on Facebook by thousands of morally weak men.

Karen Nyamu is a city girl, a bedroom entrepreneur who wants to unseat current women rep Rachel Shebesh.Karen is a single woman, who has dated the late Jacob Juma, the late Fidel Odinga and several men in the city. She lives in a posh apartment located at the heart of Nairobi, Kilimani

As she throws herself into the murky waters of politics, Rachel Shebesh and Millicent Omanga have told her, “come baby come”. As anticipated, Rachel Shebesh will trounce the two to defend her seat on Jubilee ticket against ODMs Esther Passaris. 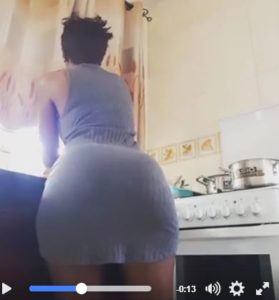