Home LATEST NEWS See What Jakoyo Midiwo Did To His Agent. Please God Save This...
Twitter
WhatsApp
Linkedin
Email
Telegram

Gem MP Jakoyo Midiwo has beaten his agent to near death after losing nominations to Elisha Odhiambo.

Jakoyo was photographed arguing with his agent, then blows and kicks followed. His agents tried to defend himself but the Raila cousin overpowered him,sending the poor man to the ground.

It is reported that the agent ate from Jakoyo and his rival, Elisha Odhiambo, but delivered for elsha, leaving Jakoyo in danger.Jakoyo later lost in the nominations.

We are informed the vocal legislature has vowed to campaign against Raila in Nyanza after he was denied ODM certificate. He is even determined to campaign for Uhuru from house to house to ensure Uhuru humiliates his cousin. 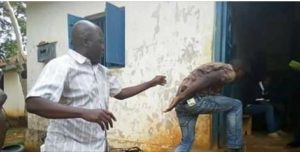