Nigeria’s president Muhammadu Buhari has made public appearance for the first time in months, causing excitement among his subjects.

The 74 year-old has been in London for Cancer treatment and chemotherapy, a disease that prompted the hospital he went for treatment to restrict him from participating in serious activities until he was cancer free. On Friday, he attending prayers at a mosque in the presidential villa in the capital Abuja. Footage showed the president greeting individuals at random and summarily saying “thank you”.

Earlier this week, the president missed his third cabinet meeting in a row, stoking further debate about his condition. Until Friday, he had not been seen in public for two weeks. Nigerians have been worried over his condition, with many fearing for the worst. His appearance has brought relief among citizens, who have only seen the vice President perform most of the duties on behalf of the president.

Though he appeared in public this week, Buhari still looks weak and eaten up..he is expected to return to London for further treatment and check-ups . 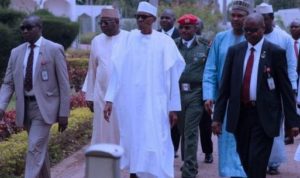 November 25, 2020
Yesterday we had a successful day, all our subscribers won bonuses. We sent 6 versions of the analyzed...

November 25, 2020
This weekend will be important for gamblers because Betika will offer the last Grand jackpot of the month....

November 25, 2020
This week we are offering accurate Betika jackpot predictions to all our subscribers, each subscriber will receive up...

November 21, 2020
We are offering 2 accurate correct score predictions today where the total odds range between 30 and 85.If...

List of Teams to Avoid When Betting For Football Matches

November 19, 2020
There are specific teams you should always avoid when betting for football matches. From our previous experience, such...

November 20, 2020
Mozzart jackpot is usually easy to predict from Friday to Sunday because the games listed in the jackpot...

November 25, 2020
We have a total of 3 correct score betting tips for our subscribers today where you will earn...