Polycarp Igathe,Chris Kirubi’s son, has been  selected by the incoming Nairobi Governor Mike Sonko as his running mate.

Igathe,who is the current CEO of VIVI Energy,Kenya,was selected from a list of 7 people who were eyeing the highly competitive position.

Igathe has been at the helm of VIVO energy since 2013 where he has overturned its misfortunes to build a dominant brand in the oil industry. Previously, Igathe worked at Haco Industries Kenya, Ltd, which is owned by Billionaire, Chris Kirubi, Uchumi Supermarket, Mercantile Insurance Company Ltd as the Director and several other top companies in Kenya.

Polycarp brings fresh ideas to the city, which has been ranked the worst in terms of waste management and traffic jam in East Africa. He will also be instrumental in the management of the city finances, which are in excess of Ksh 30 billion per year.

Sonko, who can write few correct sentences in English, thanks the almighty for Polycarp’s presence,who will represent him in global meetings. 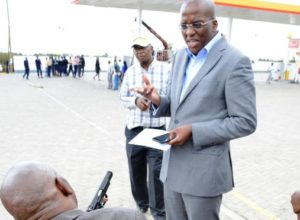