A pastor from a local church in white river Mpumalanga has been eaten by three crocodiles after he tried to demonstrate a miracle to his congregation by walking on water infested by hundreds of crocodiles.

The pastor had just taught the congregation about faith and the many miracles Jesus did. As a servant of God, he tried to emulate Jesus by daring crocodiles.

In the fateful day, the vocal pastor had told his followers to gather around the river and watch as he walk right before the most dreaded creatures, crocodiles.

“The pastor told us to come here early in the morning to witness a miracle-we thought it was a joke. We all rushed to see the intentions of our beloved servant of God. Within minutes, we saw him start walking from the far end. Everyone told him, “stop”, but he continued to walk deep inside the water. Minutes later, we saw him being eaten alive. Three crocodiles emerged and shared pieces of him, and that was the last time we saw him”, reported one of his members. 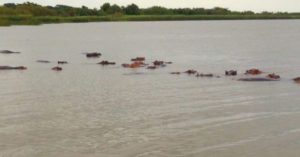