Future president Raila Odinga has unveiled his own maize flour days after Jubilee released a Sh 90 per 2kg packet of maize flour.

Raila’s 2kg packet  will retail at Ksh 75, which will be cheaper than Uhuru’s 2 kg packet. The unga will be stocked in various supermarkets across the country from this week.

The NASA presidential candidate’s unga has been labelled “Ndio Baba” and is expected to expire August 2017, immediately after the general elections.

The maize shortage has now taken a political angle as each party try to woo common citizens into electing them. As usual Kenyans will still vote based on tribe as opposed to ideologies. 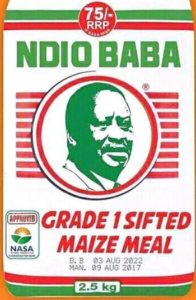