Tiote died  on June 5,2017 after collapsing during training in China, where he played for Beijing Enterprises.

The Ivorian midfielder left St James’ Park at the start of last season to move to China, playing 17 games in the Far-East.

Born in Yamoussoukro, he started out playing barefoot street football at the age of 10, not owning a pair of boots until he was 15. He began his career with Ivorian minor league side FC Bibo.

On 26 August 2010, Tioté joined English Premier League side Newcastle United for a fee of £3.5 million, after he was granted a work permit. Upon joining the club, Tioté spoke exclusively to the local newspaper Evening Chronicle, about the move, quoting: “It’s a great thrill for me to be joining such a famous club as Newcastle United.” Furthermore, he was given the number 24 shirt.

He made his debut on 18 September against Everton at Goodison Park. He completed all of his 64 passes, made two interceptions, completed all five of his attempted tackles, and his only shot was on target. From that moment on, Tioté quickly became Newcastle’s fan favourite among supporters. On 8 January 2011, he was sent off during Newcastle’s third round FA Cup match against Stevenage.

On 9 February 2017, Tioté joined China League One side Beijing Enterprises for an undisclosed fee. Tioté made his Bejiing Enterprises debut, in the opening game of the season, playing the whole game, in a 2-1 loss against Qingdao Huanghai. On 5 June 2017, Tioté collapsed and lost consciousness during a training section with Beijing Enterprises at around 18:00 CST (UTC+8). He died at 19:00 (11:00 UTC) on the same day 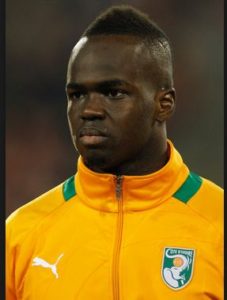