“Totally inspirational evening with President Uhuru Kenyatta as we gathered to support his re-election bid. Caroline Mutoko shared amazing audio from his 2002 campaigns, his focus even then was a united Kenya, peace, movement from absolute centralised power to a devolved system and free education. Thank you to all those who made time and to so many more who are supporting the campaign via mobile money. We must believe in something and I believe in one Kenya, I believe in progress and strong effective partnerships to actualise development, I believe in each of us exercising our individual rights to vote, and I believe in respecting that right and loving you as my Kenyan brother or sister whatever the outcome, I believe in working together to make this nation rise to great heights of progress and prosperity for all.
Wherever you stand politically, God bless you and God bless Kenya. Twende mbele pamoja”.

The statement came shortly after she shared supper with President Kenyatta at Intercontinental hotel, where more than Ksh 1 billion was raised for Uhuru’s campaigns.

Immediately after she posted this statement, NASA supporters followed with abuses, name calling and cursing, accusing Julie of being partisan despite her being a media personality.

One day later, Julie also answered ODM supporters and urged them to “commit suicide” if they find her decision unbearable:

“Dear Kenyans, I will say this as simply as I possibly can, we are in this nation together. If you cannot see the progress that has been made you have clearly chosen not to. Yes, there has been progress. Are there challenges? Yes, of course there are and both Ndinda Mutoko and I speak openly and widely about them – from corruption to tribalism and much more. ION, I exited the news cycle close to two years ago (fascinating that you barely noticed as you keep discussing me in the context of news) and have the right to comment and take a position on issues. You cannot BULLY people into your chosen stand and if you cannot respect the fact that people can take a stand that is not based on personal benefit, then that speaks volumes about you not the person you are attacking. Bimbo insults don’t work either, for women who have carved the space that we have, sorry, it does not apply and again speaks volumes about the mindless misogyny of the abuser. For those sharing civilised perspectives, all are appreciated. Let’s engage in a civilised fashion but most of all, let us respect each others views. I have love for you irrespective of where you stand and it is my prayer that you can adopt that same attitude towards your fellow Kenyans. If you can’t, what does it say about you? God bless Kenya always”. 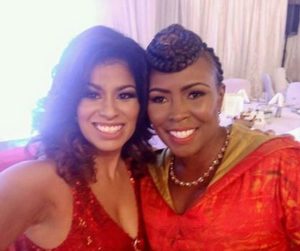