Waiguru, who is the incoming Kirinyaga Governor, was on a campaign trail when she decided to excite her followers by picking tea in front of cameras. The incident attracted thousands of supporters who came to confirm that indeed their leader can humble herself to that level.

Smiling widely, the “governor ” managed 2 kgs, which was weighed and taken to a factory. The governor later addressed her jubilated supporters.

Here is a photo from the scene. 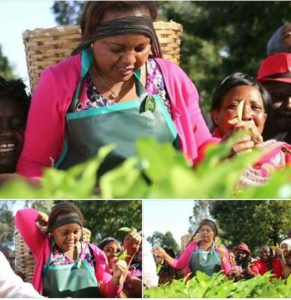