Kakamega Senator is now a laughing stock after he offered a boy Ksh 20,000 and told him to stop selling Samosas.

The Ford Kenya governor contestant found the boy selling Samosas while wearing a red t-shirt. He extended his left hand to his deep pocket, pulled out Ksh 20,000 and gave the man.The then ordered him not to be seen selling Samosa again.

In a Tweet, Bony confessed he did the act, saying he was only sympathizing with the man’s occupation.

But Kenyans have accused him of misleading the ambitious man.They argue it could be better had he advised him to expand his business instead of telling him to quit and run with the cash. 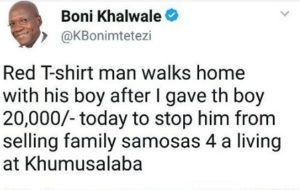