A sheep in South Africa has given birth to a bouncing baby boy, which resembles a human being.

The sheep delivered in Lady Frere early this week .Initially the owner was excited to receive a new member to his flock only to realize it resembled a man.He hurriedly called neighbours to come and witness a rare being.

The lamb’s eyes, ears and stomach all resembled a human being. To make matters worse, it had a human skin.

Chief Director of Veterinary Services, Dr Lubabalo Mrwebi, said that at a glance the lamb resembled human form but that the animal was not part human.

“We would like to confirm that the severely deformed lamb that was born by a sheep in Lady Frere this week, which at a glance resembles a human form, is not human but a deformed stillborn lamb sired by a sheep and was subsequently infected by a Rift Valley Fever at early stage of its pregnancy,” Mrwebi said in a statement.

The Eastern Cape Agrarian Reform confirmed that the picture of a deformed lamb circulating on social media was in fact a lamb born in Lady Frere.

“It is not uncommon for pregnant animals to be infected by viruses early in their pregnancy. Virus infections in early stages of pregnancy may infect the foetus and lead to the development of malformations in the growing foetus. It is likely that this is what happened to the Lady Frere sheep.”

Mrwebi said that the gestation period for a sheep is five months, and that meant that the particular sheep was conceived in late December 2016 or early January 2017.

This time had plentiful of rainfall – conditions which are favorable to the proliferation of mosquitoes and midges known to be the vectors of viruses that cause such diseases such as the Rift Valley Fever (RVF), Mrwebi said.

“It is fair to assume, therefore, that the sheep was infected by the RVF virus. The resultant circulation of the virus in the blood found its way through the maternal blood into the uterus and the foetus, which was at a very critical stage of development. The infected foetus then, as a result, failed to form properly, leading to the deformity that it became,” Mrwebi said.

“It is worth noting that a sheep has 28 pairs of chromosomes; a goat has 30 pairs; while humans have 23 pairs. These facts are important in dispelling the myth that a union of a sheep ovum and a human sperm can lead to a development of a viable life form. The deformed lamb exhibits signs that are consistent with an early foetal development that went wrong as a result of a viral infection.”

Mrwebi said that the deformed head was due to abnormal accumulation of fluid in the brain cavity – a condition referred to as hydranencephaly; the smaller than normal brain is cerebellar hypoplasia; the underdeveloped lower jaw is brachygnathia inferior; and the joints of its limbs that are fixed in extension (arthrogryposis) are characteristic.

The department’s veterinary officials would conduct a postmortem and its results will be communicated to the public.

“The lesson we are learning from this experience is that small stock farmers must keep their animals protected against diseases like the Rift Valley Fever with a correct vaccine, which is best given long before the mating season so that by the time the females get pregnant they are already protected against this disease,” Mrwebi said. 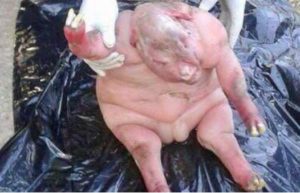