Betty Kyallo is not a happy woman after her boyfriend, Hassan Joho, took back his Porsche car for campaigns.

The car, which Joho bought for Betty a year ago, was seen in Mombasa over the weekend being used to campaign for the Mombasa Governor. Betty was spotted driving her BMW to work, which was the car she was possessing before Joho uplifted her.

A new Porsche costs not less than Ksh 10 million in Kenya. It’s one of the rare vehicles in the country and only owned by the rich.Joho,who is millionaire, can afford hundreds of such cars.

Below is Betty’s car. 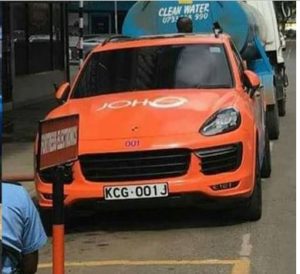