Raila’s diehard fan by the name Aalico Ohodha has shocked the entire nation after he flaunted an AK47 he is planning to use tomorrow during NASA emonstrations.

“Tomorrow will be the beginning of the end of my days on this planet..so I pray to God that should I go down tomorrow during the demonstration I will have to take as many dogs as I can with me”.

The ODM supporter was firmly holding an AK47, which he is planning to use against his perceived enemies during NASA daily anti-IEBC demonstrations.Unmoved,the unemployed youth says he is willing to die but before that,he will go with several of Raila’s enemies.

The post was shared by thousands of Kenyans, who requested the police to move swiftly and arrest the criminal. 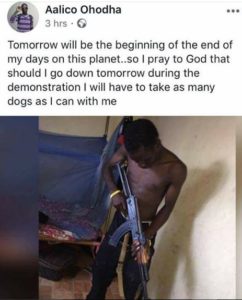