Many Kenyans have been wondering what will happen if Raila supporters don’t vote next week. According to the new electoral laws, if a constituency does not participate in an election, voting in that constituency will be rescheduled.

Knowing well that his supporters won’t vote on October 26, 2017, Raila is hoping that all his strongholds don’t go into the election so that IEBC can reschedule voting in those areas. Already Jubilee supporters  are aware Raila’s strongholds won’t participate during next week’s rerun, this believe will discourage most of them from voting-Uhuru will end up with less than 4 million votes.

Since majority of Raila’s strongholds will vote at a later date, Uhuru may find himself in hot soup especially if his strongholds register low voter turnout next week.

In recent past, Raila has not been campaigning, he has reserved the energy for campaigns at a later date. After next week,he will hit the campaign trail, which is the time he will seize the opportunity to beat Uhuru in his own game.Already,the Enigma has informed his supporters that he will tell them ‘something’ next week.The whole country is waiting for that something.

Meanwhile, if you are planning to boycott next week’s elections, the following is what will befall the country. 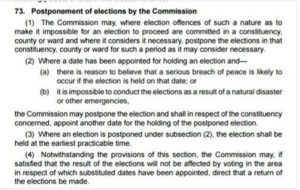