The Chief Justice voted few minutes past 1 pm and he neither  voted for Raila nor Uhuru.

Earlier, there were speculations he was to skip the exercise but he eventually appeared and cast his vote.

His appearance mean that he has okayed the election and that even if Raila moves to court he won’t succeed this time.It also confirms he is neither Pro Raila or Uhuru.

Here is a photo of him voting. 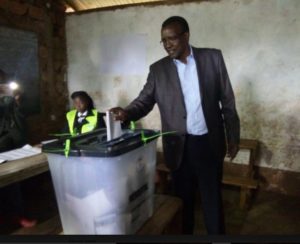