A photo of an emotional police office is circulating on social media. In the photo, a heavily armed police officer is spotted shedding tears as he is pushed to battle demonstrators.

The police office was sent to Kisumu to battle demonstrators but he was overcome with emotions, forcing him to cry uncontrollably. After he completed his mission, he was seen sitted alone near Nyalenda while shedding tears.

Those who saw the police took the picture and shared. Here is the photo of the only human police in the operation. 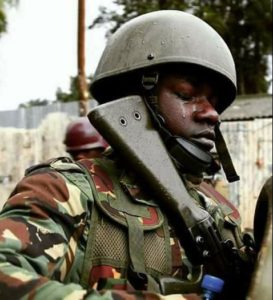