Contrary to reports circulating on social media that Raphael Tuju is rotting in jail, we have information that he is somewhere in East Africa eating life with a big spoon.

Tuju,who until last month was in charge of jubilee secretariat, is currently in Rwanda meeting president Kagame.The former Rarieda MP is representing the Kenyan government for important discussion.

NASA supporters, who are obvious jealous of Tuju’s achievements, spread a rumour that Magufuli arrested Tuju,detained him and formally imprisoned the number one Raila critic for at least 19 months. The rumour also stated that Tuju was put in the worst of prisons in Tanzania so as to feel maximum pain.

Those who were spreading the rumor should see this photo,Tuju is happy…he has in fact grown fat with a glittering face. 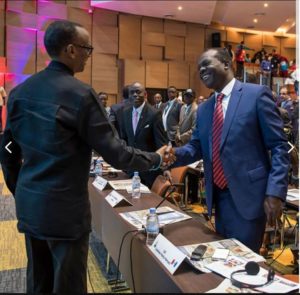