In the meeting,Kabogo explained clearly the views of Mount Kenya and urged Raila to work with the president to realize their dreams.However,one name was mentioned more than twice and it’s Winnie Odinga.For the first time,Raila mentioned that his negotiation with the president was to see his daughter ascend to a high position in government, probably Deputy President.

“Former Kiambu Governor William Kabogo paid me a courtesy call at my office. We discussed a wide range of issues relating to our journey as a nation”

Kabogo is on record saying Mount Kenya won’t vote for Ruto as the president, come what may.His sentiments are aslo echoed by several Mount Kenya leaders,who include Ngunjiri Wambugu.

What is now obvious is that Mount Kenya is sleeping with Raila and in the near future,Deputy President William Ruto will start feeling the heat.Remember,Moses Kuria was at Raila’s office recently and is planning to tour Nyanza this weekend. 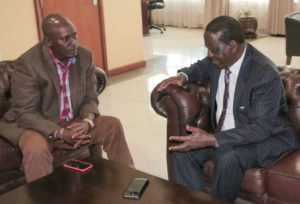