Former powerful Minister,Simeon Nyachae,is seriously sick and he is currently admitted to ICU.

The Mzee collapsed in his home last week and was rushed to Nairobi Hospital.Upon reaching at the hospital,doctors rushed him to ICU.Since then he has been under close watch by specialized doctors.

One of the doctors at the hospital told The Star.” “What I can tell you is that he complained of chest pains and was put in ICU”

It’s confirmed Nyachae is no longer able to support himself after his condition deteriorated.Close family members, including Charles Nyachae have confirmed the former Minister’s condition is worrying.

Nyachae is the richest Kisii alive. His net worth is in the tune of Ksh30 billion.He has investments in real estate,farming,manufacturing,banking and transport.One of his mega businesses includes Credit Bank,which is headquartered in Nairobi.

Nyachae is the son of former Senior Chief Musa Nyandusi. 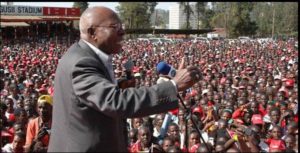 For just Ksh 199 you’ll receive 4 versions of Betika midweek jackpot predictions. We are determined to produce the winner of Ksh15 million from...

3 SURE MULTIBETS OF FOOTBALL TIPS FROM VENAS NEWS,28 JANUARY 2020