The veteran politician died at a Nairobi hospital today evening. Matiba has been ailing since he suffered from stroke about three decades ago following frustrations from the former president Daniel Moi.

Matiba has been admitted at Karen Hospital in the ICU Unit.Since last week,he had been in a coma.Today he gave up the ghost after suffering from Cardiac Arrest.

Matiba’s health condition became an issue to his family when Moi jailed him at Kamiti Maximum Security Prison in 1990.This is after the then opposition leader fought hard for multi party democracy.

Matiba was chairman of the Kenya Football Federation from 1974 to 1978, and was elected to the Kenyan Parliament in the 1983 general elections from the Mbiri Constituency (later renamed Kiharu) in the Muranga District. He served as Minister of Transport and Communications under the KANU administration led by President Daniel arap Moi, resigning in December 1988. While in prison Matiba was refused medication and suffered a stroke, which affected half his body and incapacitated him for some time. Later, a multiparty system was instituted and Matiba was released.

Matiba is the real father of democracy and Raila Odinga comes second. 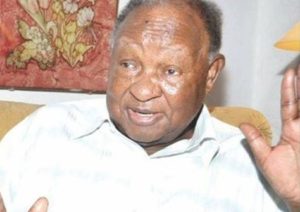