I am Esther and I have a problem. In 2017 my sister came to live with me in Nairobi. She had just completed college and was looking for employment.

I offered her accommodation as a sister and hoped she could respect my family.The first day she came, my husband was in upcountry. He came two days later and I introduced him to my sister.But as I was doing introduction, I saw my husband looking suggestively and smiling as he said,’welcome’.It was my first time to see him get excited over a visitor. About a year ago,I had brought my nephew and all I heard from my husband was, when is he leaving? “But he welcomed my sister and promised to do everything to ensure she gets a job.

I work in a bank and my husband works at the Immigration Department. I always leave the house early because of restrictions in our office.

Since my sister came, I was relieved of most of my duties; she is even the one who prepared my husband for work.

Something strange happened last year December that left me distress. That day my supervisor told me to go and see a client who was about to take a mortgage. I arrived at the client’s office in Mombasa Road and delivered the documents. Since it was around 3 pm,I didn’t see the need to return to the office,I went straight to my house.But on reaching the door,I found it was closed.I was curious to know what was happening inside.I couldn’t look through the door because there was a curtain.Immediately I put my attention to the events in the house,I heard my sister say, Hiyo Yote Inakaa Ya Punda Itaingia Kwa Mwili Wa Nani?,ingiza basi Kichwa Tu.I heard commotions in the house and finally it was silent.The husband was one shouting now,”moja haitoshi,aki usiende”.I felt so jealous and angry until I shouted,”open the door,what are you doing in my house”.

The two took about 10 minutes before they opened.When I entered the house,I found them doing nothing but my bed was not spread. I angry asked for explanation,”please explain to me like a two  year old child what was happening here,hiyo kama ya punda inamaanisha nini?”.While murmuring ,my husband told me he was explaining to my sister that in Nairobi,butcheries sell donkeymeat.This explanation didn’t satisfy me, but I resolved not to confront them further.

The worst happened a month ago when I learnt that my sister is three months pregnant.She has now refused to go home,saying my husband is ready to marry her.My husband also wants to chase me away yet we have two children together.What should I Do? 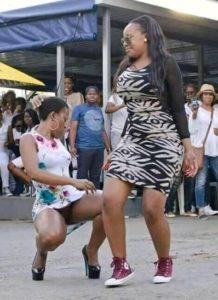