Mimi Kawaida sionjeshi wanaume except my boyfriend.Akitaka mimi humwanikia na kama sitaki nagura.On Tuesday last week,our university watchman came and told me he had secured a loan of Ksh 500,000 from Equity and that we can chew it together.He told me he has been suffering since his wife left him last year.He added that he is shy of women and that it’s only me he can share a secret with.

Since the watchman looked genuine na kitu ni yangu na haishi,I accepted all he told me.I was also broke  and I needed money urgently.The watchman promised to give me Ksh 20,000 kama ningemtolea an tuingizane uzito.

Mimi hata sikujali sura because all I wanted was money.He told me to meet him at the gate the following day at around 10 am.

I woke up, dressed and headed to the gate to meet him.All this time,I kept it a secret ,I didn’t want my bae to know.I met the watchman at the gate,who took me to his single room in Kahawa Sukari.

In the room, I told him I won’t accept to sleep with him unless he gives me the money first.He took his phone and sent Ksh50,000 to my number.I saw with my own eyes the money reflect in my account.

We took lunch and I left.When I arrived in my room,I confirmed the money was there,but the following morning as I went to withdraw in a nerby MPESA account,I found I had Ksh83 in my MPESA account.Kumbe the watchman reversed the money immediately he sent it!

Now I don’t know what to do since he even didn’t use protection. Please advice me. 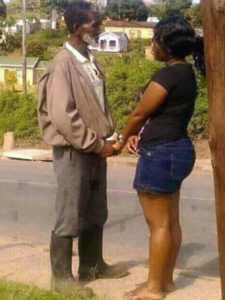 Shocking!!!This is Why Every Man Should Do DNA Test for his Children