Rick Ross reportedly jetted into the country yesterday evening buy it’s emerging the man who was spotted at JKIA is not the American Rapper.

Rick Ross is scheduled to perform today at Carnivore Restaurant tonight, but Kenyans argue it’s a “Njoroge” who was brought in purporting to be Rick Ross.

Tickets have been sold out and each ticket costs Ksh10, 000.However, there’s one thing we aren’t reading from the same page with the organizers. According to Songkick,the Hip Hop star is scheduled to perform in Daylight Beach Club, Las Vegas tomorrow, meaning he won’t be in Nairobi at the same town.Songkick is selling the tickets for the concert.We trust Songkick because they haven’t sold fake tickets.

Now tell me,does Rick Ross have enough time to travel from Carnivore Restaurant to Las Vegas for the performance?!!! 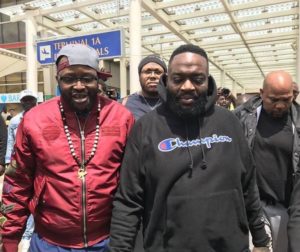