Binyavanga,who is HIV positive ,has said his partner has agreed to give him from behind for the rest of their life.In a tweet,he said in excitement:

“I asked my love for his hand in marriage two weeks ago. He said yes, nearly immediately,” he posted on Twitter.

He is Nigerian. We will be living in South Africa, where he will be studying next year. We will get married there, early next year

We will have a reception for Kenyans in Nairobi sometime next year too. Nothing has surprised me more than coming to love this person, who is gentle and has the most gorgeous heart. I consider myself hugely lucky that he loves me and I have only recently fallen in love with him, but we have known each other and have been dating on and off since 2012”

The writer and former Standard Media Group employee will have a grand reception in Nairobi and would settle with his friend(wife) in Central Kenya. 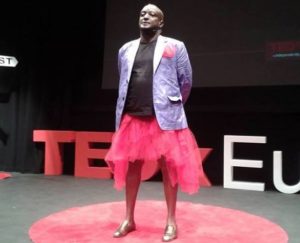