John Macharia was lowered 6 ft under and his burial attended by over 10,000 people. His burial happened yesterday at S.K Macharia’s village home. The coffin which housed his body cost the Royal Media Service Chairman a whooping Ksh1 million.It’s a special coffin because it was designed in such a way that it can preserve the body for at least 10 years.

A strange thing that happened yesterday is that politicians were not invited.The family invited 23 people to the grave yard,majority being family members.Even during speeches,no politician was allowed to speak.

Here is how his graveyard was designed 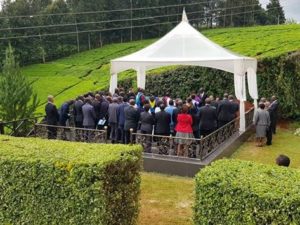