Russian President Putin’s car features outclasses those of American President’s beast. First, the car is manufactured in Russia by unknown manufacturer and is only used by Putin. One thing that stands out is that only one such car exists in the entire world. This is so because there are certain features only the manufacturer and the president are aware they exist in the car.

Vladimir Putin’s car is designed in such a way that even a rocket cannot penetrate. Once he is inside, any bomb, bullet, rocket or poisonous gas cannot reach him. The car has amazing stability with its tyres designed in a way that even if they burst while in motion, the vehicle will continue moving without losing balance.

The Russian president changed his old limousine to the new one because there is an additional feature the old one lacked. The new one can change the colour based on the environment. It is also capable of being driven in both directions.

Unlike Trump’s Limousine which cannot prevent him from nuclear attack, Putin’s limousine has the capacity to protect him for up to six months. Inside the car there’s oxygen cylinder which can last for several months.

Here is the photo of Putin’s new limousine. 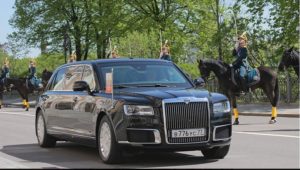