The story purporting that Kenyan singer Ringtone has bought Zari Hassan a brand new Range Rover is fake. A source from Radio Africa reveals that the company was doing PR for their online platforms.

We managed to stare at Ringtone’s bank statements and what’s shocking is that his accounts have less than Ksh3 million.The singer is also servicing two loans.For the past 6 months he has been struggling to pay his  debts,he even switched off his phone last month when one of the many people he owes tried to reach him.

Today,he miraculously became rich and was able to afford a Ksh16 million Range Rover to rewards the woman his eyes are feasting on.Ringtone was being used to advertise the Range Rover and also drive traffic to Radio Africa blogs through this PR exercise.

For all standards,Zari is richer than Ringtone and she has seen it all.There is no way she could accept the car when she has over 6 top of the range cars. 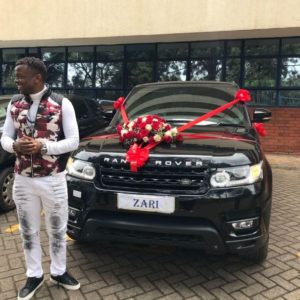