Nyamira residents will no longer depend on electricity to charge phones after they discovered a banana tree that produces electricity.The discovery happened Friday May 11,2018 in Nyamira,Kenya.

One man by the name Mecheo wanted to experiment whether his phone could be charged by the banana plantati.He pinned the charger into the tree and immediately the phone started charging.Due to excitement,he called other villagers who came and started charging.

An eye witness reported this:

“The inhabitants of this village in Nyamira Ekerenyo discovered a banana plantation (tree) that produces electricity on its own. The tree charges any kind of phone or any electrical appliance and works 24 hours. Free Electricity in the village where there is no electricity provided by human beings”

Here is the photo from the scene 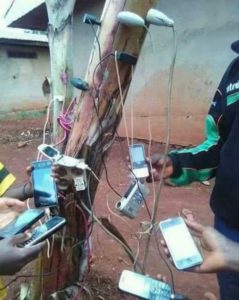