Okoth Obado is a man of magic.Yesterday he graced a unique ceremony where he flagged off a cow.

The governor had bought a calf for thousands of shillings as part of the achievements of his administration. He gathered a crowd to cheer him up as he flagged off the cow .Clapping and ululation rented the air as the governor moved a Kenyan flag from left to right and vice versa .

After the cow moved from the scene for fear of being attacked by the crowd,Obado declared:”this is a serious county, we are for development, nothing more nothing less”. Everyone clapped including professors.

Here is how the ceremony went on 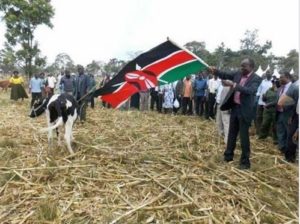