Mr Omondi has been doing cocaine,bhang and other hard drugs for 19 good years.Today at 3 am,Eric Omondi received a distress call that his brother was lying in River road. When the comedian went to pick him,he found Onyango unconscious and heavily foaming. That’s when he rushed him to hospital where he died.

According to Eric,his brother had been in and out of rehab ever since he was a boy. Drugs had taken toll on him .Eric’s family had tried to rescue his life but it seems Onyango had decided to die in drugs.

Eric now advises young Kenyans against usage of hard drugs. He has shared the photo of his brother who is now past tense. 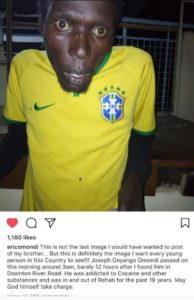