K24 journalist, Betty Kyalo, has started dating a mzungu.leaving Kenyan men in tears.The TV news anchor started dating the Mzungu,who is believed to be from Britain, immediately she was dumped by Joho.

Yesterday night, he made sure the world knows she is not sad as anticipated, especially after Dennis Okari got married to another Kamba lady.

Since divorcing with Dennis Okari,Betty sought warmth from Joho before she was shown the door,but no sooner had the dust settled than she found love again.Here is the photo of the man squeezing between her legs: 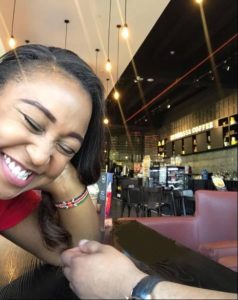