There was drama in Kisii town when a shoe shiner mzee almost became blind by watching a woman sitting badly before him.A photo from the scene has emerged where the mzee was embarrassed to see the garden of Eden for long.

The woman,who was in the mini skirt had zero manners ,as a result,she decided to punish the mzee.She went to brush her shoes only for her to open the legs for the man to see.On realizing the man was a bit interested, she moved closer for a strategic view.

Below is a photo of what happened next—nowadays people have no manners!!! 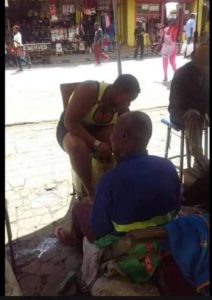 October 26, 2020
There is someone who placed a bet for Celtic, Juventus, Arsenal and Everton---he didn’t sleep. Those were high...

October 29, 2020
There will be several matches in the EUROPA League competition today where Arsenal and Tottenham are aiming to...