There was a miracle in Usenge beach yesterday when a fish that resembles a human being was captured from Lake Victoria. The fish, weighs 5kgs had has a mouth which looks like a human being, the teeth also resemble those of a human being.

Villagers and fishermen gathered near the beach to see the rare fish as the fishermen who captured it got scared. The fish was photographed and pictures sent to us.

Below are the real photos of the fish. 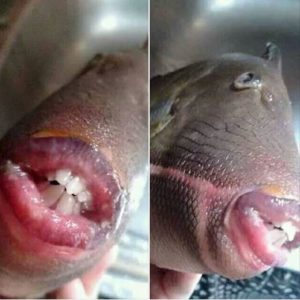