There was shock in the Republic of Zambia when the whole Minister woke up, took a shower, wore his suit and proceeded to his office to receive two motorcycles donated by Chinese government. The ceremony happened yesterday.

After receiving the motorcycles in a colorful ceremony, the Minister noted,”

“Ambassador Liu Hongyang, of the People’s Republic of China (PRC), Thursday, presented a donation of two (2) motorcycles to the Ministry of Information and Communications Technology.

Henry Mussa, the Minister of Information and Communications Technology, officially received the motorbikes and thanked the Chinese Government for the timely donation that he said would ease challenges faced by Ministry”

The motorcycles will be used by the government, clap for China please!!! 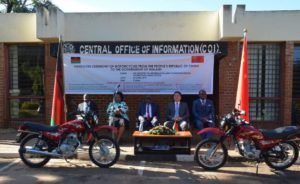 September 24, 2020
There will be several EUROPA League Qualification matches tonight, we have sampled a few games and prepared tips...